The Anatomy of Islamophobia: Rehash an OLD Story as New: Set LOSE in Internet Land: How the Clarion Project Did It

To open, what this story is not about. It is not about the Qatif Girl. She is but a prop in this instance, used by an organization that has rightfully been named as one of the top propagators of Islamophobia, The organization is the Clarion Fund, founded in 2006 by Canadian-Israeli Raphael Shore. Read about this organization HERE giving their history, and their agenda.

Now for the unfolding of the Anatomy of Islamophobia: the REHASH of an old news story, set lose on the Internet. How I saw this unfold (and it's still unfolding as more and more sites are posting this "news")

On Thursday Sept 26 Nick Kristoff posted the following on his Facebook page, linking to an article at Examiner.com by Timothy Whiteman (who Loonwatch wrote about in a very interesting article) Note how many followers Nick Kristoff has (623,734) Notice how many likes he received for the post.(1,084) 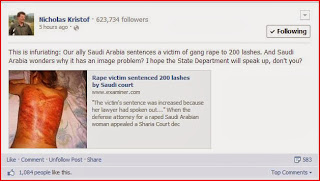 Then commenters, including myself, did just a bit of digging and realized that the article he had linked to, the story, had an uncanny resemblance to the story of the Qatif Girl. However, what the Whiteman article failed to note was that the Qatif Girl story was old news, she had been pardoned in December 2007 by King Abdullah. Whiteman's  story is alarming! It is NOW and the girl has had her punishment increased to 200 lashes just this week! Due to  proof of how this story seemed eerily similar to the Qatif Girl, Nick Kristoff wrote:

More comments ensued, namely by myself, noting that the Whiteman article that he had posted, sourced an article on the Clarion Fund website as the only source of his "news".  Note the date Whiteman says Clarion posted the article: Sept 22, 2013.

I asked Kristoff to look into the the organization that had rehashed an old story as "news", leaving out the resolution of the story, the Qatif Girl's pardon. I asked him to look into the Clarion Fund because they are a top propagator of Islamophobia. He ignored me and eventually deleted the entire post writing: "

Nicholas Kristof Folks, I don't have confidence in this article any more, and I'm going to delete this post. I think it's the 2007 Qatif Girl case, just recycled.

That update was added yesterday morning after I left a comment there that has been deleted, calling them "Liars", this isn't news, and the Qatif Girl was pardoned in December 07.

Unable to find the article in cache with the original date of Sept 22, I have found other proof that Clarion published the article as "news" on Sept 22, 2013. As well, since they did, this "news" has spread to page after page of Whiteman's article and Clarion's original article. Here is the screenshot of Googling this phrase "Clarion Saudi Arabia lashing: Note the date. 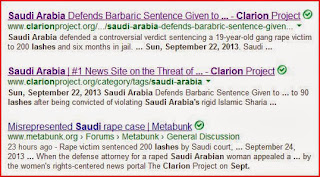 Now, here is what I would like you to do, read the comments on Whiteman's article. It's the usual, Saudi Arabia of course is mentioned, but most of the comments (as usual) are bashing all Muslims. Why? Because this is how it works in the Islamophobe Industry, search out every single thing you can find negative regarding Muslims and then paint all Muslims with that brush. Paint them all as women abusers. (and in Whiteman's case call the Clarion Project a "women's rights news portal which is beyond laughable) Yes Saudi Arabia is rife for use by the Islamophobe Industry but this is NOT about the Qatif Girl or Saudi Arabia, this is about smearing all Muslims any chance you can get, even if it means rehashing OLD news and omitting that the woman in question has been free since December 2007 and never received ANY lashings and lashings are certainly not imminent for her NOW. Indeed it is Whiteman's article that is spreading like wildfire across the internet, now on page after page NOT saying she was pardoned, but rather she is in danger NOW. Shark chum, and boy oh boy are they biting. They always do.

Now, just as Whiteman picked up Clarion's Sept 22nd "news" story, another journalist has also picked it up through other sources writing after Clarion's article and written his own story at opposingviews.com. Jonathan Vankin has listed his sources as New York Times, Daily Bhaskar and AP. Note the dates on the sources. The NYT article is from 2007, the AP article is from 2007 but the Daily Bhaskar article is dated Sept 27, 2013 and gets it ALL wrong saying the woman was raped on Sept 22 just last week! Notice that the Daily Bhashkar article sites the Clarion Project as the source. (apparently not reading it very thoroughly because Clarion states the case goes back to 2006) How could Jonathan Vanig who has so many credits to his name get it so wrong? Answer, he did, and he didn't put two and two together that the 2007 articles had an entirely different date on which the woman was raped! I have emailed Mr. Vankin but as of this moment he has not responded to me. How many times is Mr. Vankin's article now going to be shared in Internet Land? How many times is it going to be used NOW as shark chum to bash all Muslims?

This latest shark chum all started with the Clarion Fund on Sept 22.  They have attempted to cover their tracks, but it doesn't work, for the proof is there above, they published on Sept 22 and since then one more "incident" has hit Internet Land. A woman is going to be lashed 200 times! Look at those EVIL Muslims who are doing this.

That old saying, "Everything old is new again" applies.

Islamophobia and its Impact in the United States